Those who enjoy taking greenwings can appreciate a very different aspect of Colorado waterfowl hunting. The look on a youngsters face when the first flock of the morning is spotted, the excitement when they begin to work the decoys, and the screams of excitement as ducks and geese splash down or hit the dirt. But how does one develop a healthy appreciation for Colorado waterfowl hunting with youngsters while not burning them out? The answer is simple: don’t force it, go with the flow, and make the day about them.

For example, I drove my 8-year old out to western Nebraska for a late December duck hunt. Conditions were going to be perfect: snow, 20-25 mph winds out of the NW and the migration tracker was calling for a fresh wave of birds. 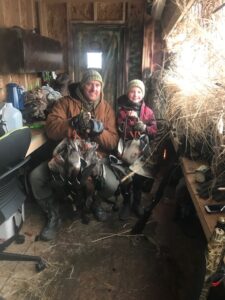 We left the house at about 6pm and drive straight to Big Springs. He had played hard all day and was pretty beat but didn’t sleep on the way out. Excitement for the best of him and for good reason.

We went to bed at about 10:30 and went right to sleep. The alarm went off at 5am sharp and I was ready to go. My little guy on the other hand was having a bit of trouble waking.

As I attempted to get him out of bed, my 8-year old’s enthusiasm for waterfowl hunting diminished greatly. I played the scenario out in my mind: force a tired 8-year old out of bed on a windy cold day so he can be miserable. What would that do to his enthusiasm?

I gave in and decided to lay back down. He woke up at about 8 and immediately pounced on me saying, “let’s go hunt dad! Come on, get up!” We packed up, grabbed some breakfast and were on our way.

The group had only shot 5-birds when we arrived and the end result was limits. Since the boys set out all the decoys, we 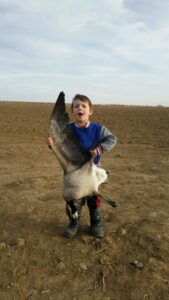 volunteered to pick up. The look of enthusiasm on my little hunters face and stories that followed were priceless. Imagine what would have happened if I forced him out of bed at 5am? Such is Colorado waterfowl hunting with youngsters.

Everyone in the blind fed off my little guy’s enthusiasm and had a blast. Whenever I let the group know that I planned to be out hunting they would ask, “will the little dude be with you”. Guess I’m chopped liver when it comes to hunting.

To this day he goes right to the camo section in Cabelas and starts asking “Can I have this? Can I have that?” Constantly he tells stories of the day we shot so many ducks “even though” it was so cold and windy. The decision to get a few more hours of sleep created a monster but I ain’t complaining!