Goose and duck hunting in Colorado for the the 2017-2018 hunting season began a bit rough. The Colorado duck

hunting opener was decent but was followed by a couple week warm spell that shut things off. A November cold spell pushed some ducks in and club hunters were able to get some long awaited shooting in. Our properties didn’t disappoint.

Colorado Goose Hunting season began in mid-November and it didn’t seem to slow from that point on. Joe began the season up in Wellington and moved around at his heart’s desire. He was particularly interested in the Watkins field and put some really good numbers on the ground. James and Wes also joined the Birds & Bucks crew on a more permanent basis. They reported being “sick and tired” of landing hundreds of geese after limits were shot. Every time we became concerned about hunting becoming slow, a new push of birds would arrive. 8-9 person limits were even shot on a few occasions.

To look at the variety of guided hunts we offer, visit https://birdsandbucksoutdoors.com/colorado-goose-hunting-guides/ 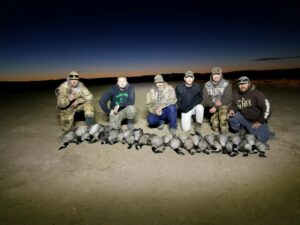 The last month showed some “burnout” of birds so we moved to the ice. Once again, birds were plentiful and limits came often. One guided hunter didn’t arrive until 9:15 as he needed to get his license from Colorado Game and Parks as the new licensing system was being implemented. Within 10 minutes of arriving, he was done with his 5 geese. He did hunt the next day and had to wait a few hours before getting his volleys in.

As the weather became warmer towards the end, we found ourselves back in the fields and pounding away at the 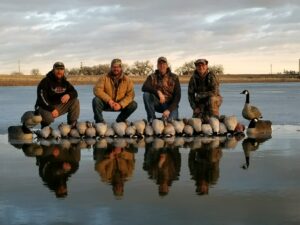 northward migration of honkers. Birds did prove a bit tougher but many still left with limits. Our Wellington fields loaded up incredibly and geese seemed to move from one side of the property to the other as we hunted the multiple pits.

Our Dakota decoys did prove to be a game changer out in the field. When looking at a spread, you’ll notice the realism immediately. That, combined with our Colorado waterfowl hunting guides amazing calling, really helped get birds on the deck. Dakota decoys can be seen at http://www.dakotadecoy.com/

River duck hunters also got after a good amount of birds. Those that hunted the weather found themselves leaving with quick limits. Nothing better than a stringer full of greenheads on a winter day.

All in all, last season was one for the ages and we had a blast getting to know new people and spending time with returners. So, until 2018-2019!!